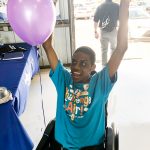 Once a year, an event occurs in South Florida that rolls out the red carpet for children with mental and physical disabilities. This event is Fly Day, created by the Dallas-based nonprofit Challenge Air.

On Jan. 25, Challenge Air hosted its 27th annual Fly Day in Fort Lauderdale at Banyan Air. Though the event took place from 8 a.m. to 5 p.m., the planning began 364 days prior.

“Just by trial and error, we were able to discover that we could use the airplane as a modality of inspiration and motivation as well as education and entertainment,” said Jeff Shaffner.

Shaffner was one of the original pilots who flew as a wheelchair-bound pilot in the event. He is now a Fort Lauderdale Rotarian and member of the Board of Directors for Challenge Air.

“It’s like a metamorphosis takes place,” he said. “One kid gets on the airplane and another kid gets off.”

However, Shaffner was quick to mention that it’s not a simple task to pull off such a spectacular event. One of the main challenges faced is gathering sponsors.

“It was very hard to get sponsors on board, there are a lot of different charities and it’s very competitive among all the different 501(c)(3)’s,” said Shaffner. “We operate like a business, and we have to have enough money to pay our overhead and to carry out our mission.”

One of this year’s main sponsors for the South Florida Fly Day, was the Gina Rose Montalto Memorial Foundation.

Anthony and Jennifer Montalto, Gina’s parents, donated a generous amount of money and volunteered at the event.

Jennifer Montalto said that Gina loved volunteering with kids of all different abilities and when she and her husband found Challenge Air, they knew it was a worthy cause.

“We knew it was a perfect fit, with kids of different abilities and the flight aspect, and it just seemed like a perfect match,” Jennifer said.

Sonny Friedman, an original member of the Challenge Air Board of Trustees, said his life has been altered by Challenge Air.

Friedman was the first person recruited in the creation of Challenge Air by his close friend Rick Amber. Amber was a quadriplegic veteran, who combined his passion for flight with his compassion for mentally and physically handicapped children. He wanted these children to experience flight. He wanted to show them that their disabilities didn’t prevent them from touching the sky. Challenge Air is the result of Amber’s vision.

One of the parents in attendance at Saturday’s event, Holly Tello, said it was her first time attending the event, and that she and her son, who has autism, already plan to return in 2021.

“He doesn’t really understand emotions, so he couldn’t tell if he was nervous or excited, but once we got up, he loved it,” said Tello. “Oh my gosh, he was talking, and he said ‘Roger’ and ‘Let’s take off.’ He had a blast.”

Banyan Air’s administrator, Leslie Horkin, who coordinates and plans the event from Banyan Air’s side, said that she begins her preparation a year in advance.

She said that she wouldn’t be able to create such an amazing event without the help of her team. Her team includes the front desk staff and the line service men.

She credits her team, and Banyan owner, Don Campion, for Banyan Air’s large part in the event. It’s Banyan Air’s crew that does the behind the scenes aviation work.  Horkin explains that there are significant costs involved in hosting the Fly Day.  Banyan Air empties a hangar to house the event, they pay staff overtime to work on a Saturday to support the cause and they offer discounted fuel to the pilots who volunteer their time and airplanes and finance their Fly Day fuel.

Chrissy Johnson, who has a 12-year-old daughter, said this was her second time participating in the event and each year she is amazed at the effort that is put into Fly Day.

Aside from Banyan Air hosting the event, the members of the Rotary Club of Fort Lauderdale volunteer their time and effort to staff the event.

Terry Robinson, a Fort Lauderdale Rotarian, who’s been participating in the event for 23 years, has the task of finding the pilots for the event and mobilizing Rotarians to volunteer for different positions. He starts this process months before Fly Day. This year, his tenth year with this responsibility, he successfully recruited 22 pilots, which gave 82 children the opportunity to fly a plane.

Aside from Robinson, other equally involved Rotarians spend their entire Saturday registering the volunteers and the families, loading the children onto the planes, weighing the children and their families in preparation for flight, flying the planes and serving food.  The Rotarians with a knack for creativity provide activities such as face painting and game booths.

Without the aid and instruction of the Flight Dispatch Station, the pilots would not be able to fly the children. Rotarians and other volunteers staff this station and calculate which children will go up in which planes.

Not only do the families get to participate in all of the events offered throughout the day, they are treated to a lunch donated by Carrabba’s Italian Grill.

Vickie Willis, the manager of the Carrabba’s located in Pompano, has a grandson with special needs and finds Fly Day heartwarming.

All of the hard work that is put in by the Rotarians and the numerous other volunteers and sponsors does not go unnoticed by the families who participate in the event.

One of the children who participated in the event, and has been participating for over five years, is Justin Yselonia. After a moment of thinking, he said his favorite part of the event is that it gives everybody the feeling of, “Yes you can, you can do this.”

“I appreciate and admire all the effort and talent brought into Fly Day,” said Yselonia.

Lynn University’s School of Aviation’s Assistant Chief, Dominic Liberta, was one of the volunteer pilots on Saturday. He said that as a flight instructor, he treats everyone the same and that the Challenge Air participants are no different.

“It’s really nice to have people appreciate it. Most people look at a small plane and think ‘Oh, I don’t want to get in that.’ It’s different at this event, these kids are just happy to be up in the air,” said Liberta. “These kids want to get in the small planes even more, for them it’s not about the size, they just want to fly something.”

Challenge Air is not just an event, it’s a mentality.

Jim Muhs has been participating in Fly Day with his daughter, Jamie, for 12 years.

He said that even though she is mostly nonverbal, she knows the word, ‘Fly.’

“It’s just a lovely thing, and whenever she’s doing anything that’s fun, whether it’s going horseback riding, going on carnival rides or going through the everglades on an airboat, she says ‘Fly,’” he said. “So, for her, this is the most exciting thing she can be doing.”